Saffron, the Gold of Greek Earth as it is called, was among the most popular and valuable spices of ancient civilizations, for its flavor, color, pharmaceutical and aphrodisiac properties.

Cleopatra used it in her cosmetics, ancient Phoenicians in their offers to Goddess Astarte, Homer mentioned it in his writings, while we still find it in The Old Testament.

The residents of the area plant saffron every summer and when Autumn arrives remove by hand the precious spots of the beautiful flower and they carefully drain them so that they make the deep red delicate yarns.

The Greek saffron belongs to the highest quality of saffron in the world.

The word “krokos” (saffron) in its original or in derivative forms when referring to the plant, the bloom, the essence or the herb/drug, is well known since the earliest texts of the world.

As an essence and bloom it is found intact in the Book of Proverbs as well as in the Song of Solomon 3 in the Old Testament.

In addition, the verb “krokizo” is used by Plutarch and Dioskoridis. Homer, in his Hymn to Demeter 178 speaks of “krokos bloom”, Theophrastus says that from the flowers of the plant they got the saffron essence, while Strabo said that near Corycian Cave grew saffron of excellent quality.

Finally in Hippocrates, Asclepius, Dioskorides, Galen, and other physicians of antiquity, the word is used to refer to a medicinal or therapeutic herb.

Apart from the aforementioned meanings, the same word has been used by some of our classical poets, such as Homer, Sophocles etc., who have been later imitated by some of our more recent ones, for the description or simile of an object, more frequently so for the sunrise itself.

It was also known to other ancient civilisations as well, such as the Egyptians, the Hebrews and the Romans (Virgil, Pliny and others).

However, it retained its undisputed Greekness since it derives from the Greek word “kroki” (thread that is woven in warp threads with the shuttle). 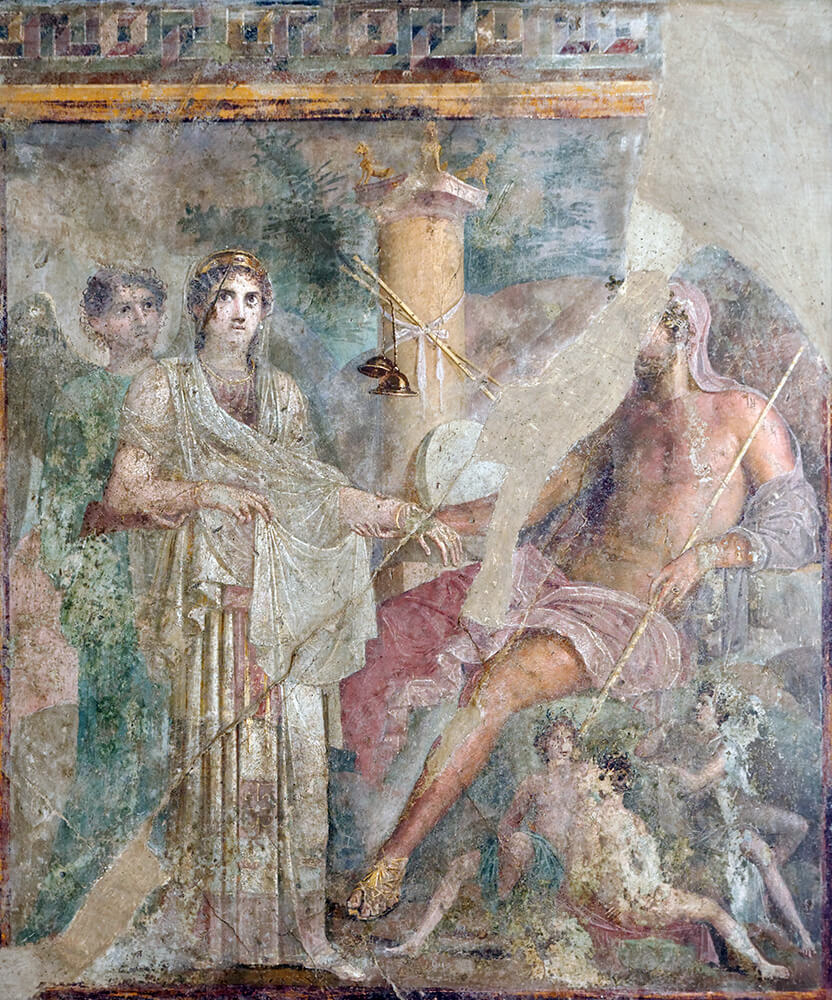 The myth of Krokus

While Hermes was practicing in discus throwing, he fatally wounded his mortal friend Krokus.

What a shame! How could he, a God, kill a man! Hermes was deeply saddened.

So, he decided to grant Krokus with immortality by transforming his soulless body to a beautiful purple flower and his blood into three red stigmas at the heart of the flower (saffron crocus). Since then, every autumn, the flowers of crocus cover the Greek land , with a purple carpet and fill the air with their fine aroma.

Homer, the ancient poet, at some point in the Iliad sang the sunrise somewhat like that:

“The Sunrise drew her crocus-like scarf over the sea to bring light on Gods and men alike.” “That is what Zeus (son of Saturn) said and at once grabbed his wife (Hera) in his arms; just for them, the divine land grew freshly-bloomed grass, cool clover and crocuses and hyacinths, thick and soft that covered them. There, they lied down and they were covered with a cloud soft, gold; and bright drops were pourring down on them…”.

The above story took place on the Spring marriage of Zeus and Hera (heaven and earth), that is when the earth is pollinated by rain. 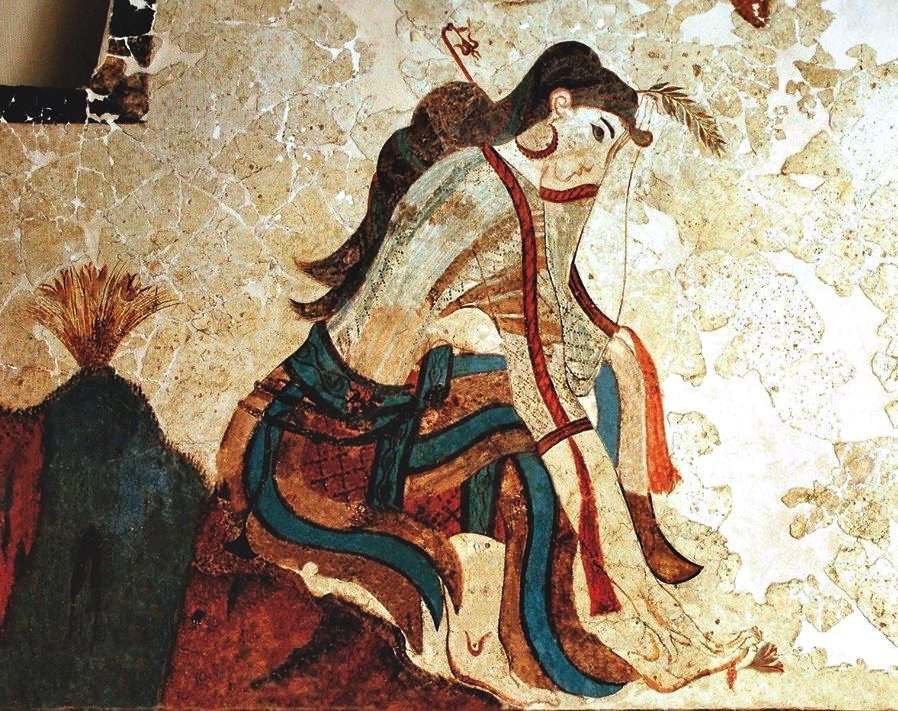 Saffron as a plant, dye, medicinal herb or flavouring, was known in both ancient Greece and other ancient peoples. But the opinions of all those who have involved in any way with saffron, differ. Some argue that saffron is native to the East where it was first cultivated.

From there it was brought to Europe by the Crusaders in the 13th century A.D. Others have claimed that it originates in Greece and that it was first cultivated during the Middle Minoan era.

This view is reinforced by a painting of that era (1600 B.C.) named “Krokosyllektis (saffron picker)” that was found in the palaces of Knossos, showing a young girl or boy, to some a monkey, picking saffron flowers and putting them in a hamper.

It is also claimed that the Greeks engaged in cultivation of saffron during the Macedonian and Byzantine times.

It was spread to the East through the expeditions of Alexander the Great.

What we can be most certain about the history of this plant is that the Arabs after systematically cultivating and using it not only as spice but mostly as a medicinal substance, brought it to Spain in 960 A.D. and from there it spread both directly and indirectly to other countries of Europe.

However, the current cultivation of saffron in Greece (in Kozani area) was imported by Austria during the 17th century.

More specifically, it was brought by merchants from Kozani, who at that time maintained close trade relations with Austria.

We use cookies on our website to give you the most relevant experience by remembering your preferences and repeat visits. By clicking “Accept”, you consent to the use of ALL the cookies.

This website uses cookies to improve your experience while you navigate through the website. Out of these, the cookies that are categorized as necessary are stored on your browser as they are essential for the working of basic functionalities of the website. We also use third-party cookies that help us analyze and understand how you use this website. These cookies will be stored in your browser only with your consent. You also have the option to opt-out of these cookies. But opting out of some of these cookies may affect your browsing experience.
Necessary Always Enabled
Necessary cookies are absolutely essential for the website to function properly. This category only includes cookies that ensures basic functionalities and security features of the website. These cookies do not store any personal information.
Non-necessary
Any cookies that may not be particularly necessary for the website to function and is used specifically to collect user personal data via analytics, ads, other embedded contents are termed as non-necessary cookies. It is mandatory to procure user consent prior to running these cookies on your website.
SAVE & ACCEPT
×

Item added to your cart

Continue Shopping Go To The Cart